In the race for the lead position in DeWi, Helium has some formidable competition nipping at their heels. There has been some speculation and dread around similar organizations coexisting, but friendly competition is what drives industry forward as developers create new ways to engage with their community and optimize the services they provide. It is best competitors fight for best prices and practices, and similar organizations springing up point towards long term viability of the industry. Monopolizing a technology or service has historically been proven less than ideal for the end user, thus having at least several actors in the field is looked at as positive.

Since 2019, Helium has provided wireless connectivity for the Internet of Things, and has a network of 5G nodes undergoing the same explosive growth their LoRaWAN network began to see around 2 years ago by incentivizing individuals to install hotspots at their house to share their internet in exchange for $HNT. Helium allows hotspots to prove their asserted location and transfer data packets using LongFi, which is a wireless networking technology that combines LoRaWAN with the Helium Blockchain.

Working with FreedomFi, Helium aims to deploy 40,000 CBRS small cells by the end of 2022, but may face supply chain restrictions that would play a role in their ambitious trajectory. Nevertheless, work is being done in order to allow Helium 5G Hotspot owners to share their Internet connectivity. The Helium blockchain is going to be utilized in this way to provide incentives and also for secure transaction via the new $MOBILE tokens, the same way it is used for LongFi and $HNT. 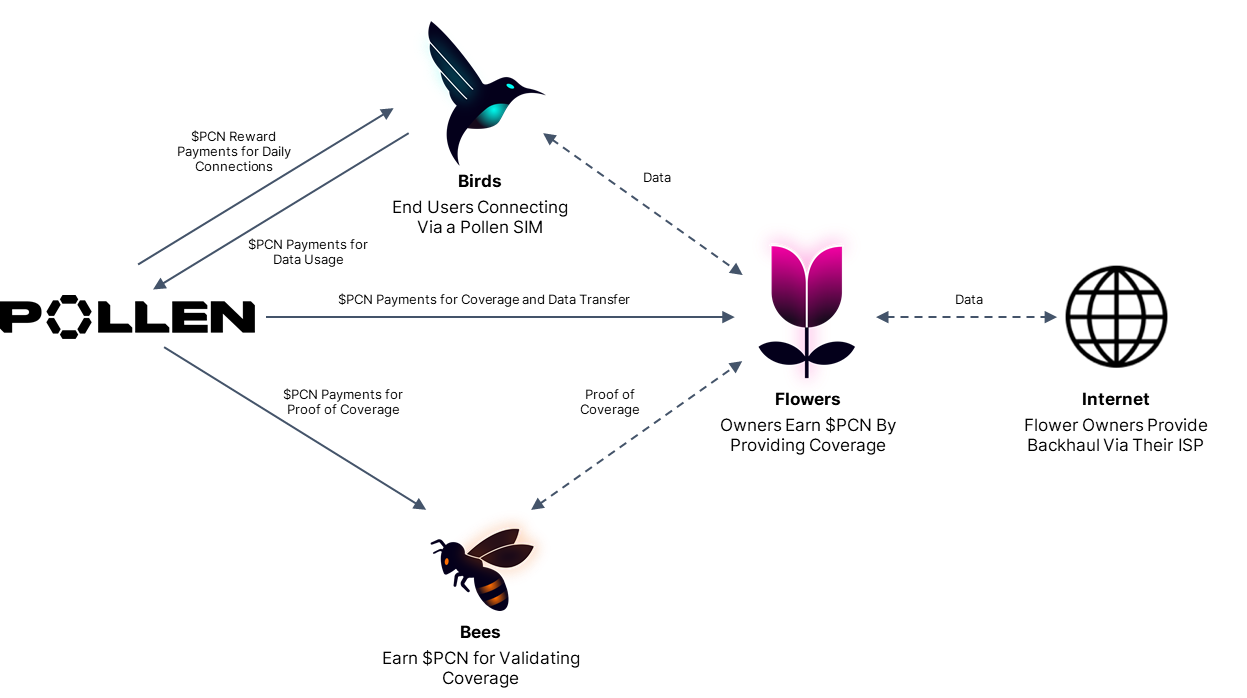 Since 2021, Pollen Mobile has provided wireless connectivity for LTE devices, and aims to incorporate 5G when CBRS supports it. While smaller than Helium's fleet at just over 1500 units deployed, (Helium has over 900,000 IoT Hotspots deployed) Pollen is also scaling to be a formidable network and will quickly catch up in experience. Pollen has a more centralized structure with less transparency, but already sells their own SIM cards and eSIMs that allow end devices to utilize the Pollen network, making the device a "Hummingbird", the company's name for end user devices. The coverage of the network is still scarce, but it is to be expected, however it is growing and can be observed in real time in their explorer. Helium network users currently have to use GigSky to connect, an app and eSIM service that provides reliable data coverage to over 160 countries. Both the Helium and Pollen networks use the same hardware to expand their networks, prove coverage, and reward participants, but have implemented different rewards structures. Pollen mobile has less mature economics and a single fixed price token, the PCN, while Helium has the fixed price DC, and floating $HNT.

Additionally while both networks are new in the 5G space, Helium has the advantage of 3 years of experience in the IoT field. The issues it has faced and challenges it has overcome growing the single largest worldwide IoT network can not be taken lightly. The experience gained would prove to be a valuable tool in growing the Cellular portion of the network and while it has its unique set of challenges a lot of concepts remain the same (especially on the blockchain side). Make no mistake Helium is a seasoned veteran, where Pollen is the spry newcomer and they will both learn from one another during their journey of creating a truly decentralized mobile network infrastructure.

Furthermore as Helium has been around longer its list of partners is naturally larger in both the IoT and 5G field, check out their vendor list here:

Both networks, however, aim to tackle the lack of ubiquity in wireless, the greatest shortcoming of telecoms in place today. This is where these two entities shake hands.

Competition drives innovation and better pricing for consumers. Helium has a large first-mover advantage, but Pollen does nothing to threaten Helium, nor vice versa. Pollen joining the space gives validity to Helium's utility, both of whom now disrupt the wireless industry. At the end of the day, the goal is ubiquitous wireless, so the two are by all means on the same team. The goal is to disrupt without destroying, both do this well.

There is a lot of "FUD", or Fear, Uncertainty, and Doubt, circulating in both communities regarding the other. There appears to be a villain/hero duality, one way or the other, but there's no disloyalty in supporting both. Consider the comparison between Pepsi and Coke for example, both of whom set an industry standard symbiotically, sparking new ideas, and often working together to overcome goals in political infrastructure that stand in the way of their success. Rather than 2 corporations, you have 2 user-owned organizations fighting together to provide the world with affordable connectivity.

Less like fighting over a bone, and more like hunting in a pack. Pollen is our friends. Go out and grow good things!